I’m piloting an armed robot through a fictional concentration camp. I’ve seen men beaten, starved, murdered and eviscerated. I’ve scrambled out of a cart of emaciated, mutilated bodies – eyes cut out – and wrought revenge on my captors with vivid, pornographic violence. Now I’m trudging through the ashen rain with a heavy metal riff building in my ears, a Jewish Technology Wizard riding on my back whilst I cut through soldiers’ bodies with my oversized minigun and blast them into quivering lumps with an infinitely-replenishing rocket launcher.

Is it necessary? For sure it’s fun as a kind of power fantasy, but I’ve an unease aching in my stomach and a feeling of wrongness I don’t want to peer into too hard. The New Order’s tone is all over the place – it’s a game that really doesn’t know what it wants to be. It presents itself Doom-style ‘neo-retro’ FPS, but it plays like a cover-based shooter. It tells me serious, sentimental war story, but then throws me dual-wielded shotguns like a level of Quake. It laments the tragedy of war, but then there’s times when it looks a lot like a Nazi torture simulator. Ultimately, there’s a fun – if limited – game underneath, comprising some impressive set pieces and frenetic firefights – but as a unified whole it’s a bit messy.

Here’s the gist: in 1944, the Nazis discover a mysterious advanced technology and use it to promptly conquer the world. By the year 1960, London is under martial law. Beijing is in ruins. Manhattan is a smoking, radioactive crater. The only front left is in Africa, and even that’s receding fast, fought by mechanical monstrosities like the Panzerhund – an enormous robotic canine that shreds and gores infantry with its terrifying steel jaws. A handscrabble resistance (as always) has taken up residence in the sewers of Berlin, but without arms, transport or manpower their hopes are fraying fast, along with their tempers as they stew over their lost comrades in a claustrophobic bunker. It’s your job to turn their fate around and personally strike at the heart of Germania.

1960s Berlin is the apex of Nazi hurbis.

And strike you do. Through the course of TNO you will storm a Wehrmact fortress, break into an SS prison, level a forced labour camp, hijack a nuclear-equipped submarine, shoot down a skyscraper-sized walking death machine and even raise hell in a god-damn Nazi moon base. You do this through a mix of low-tech stealth, like throwing knives and throat-cutting, high-tech energy weapons like the laserkraftwerk, that explodes SS officers into pleasing fountains of gibs, and old-fashioned small arms like assault rifles and grenades.

For the most part, though, the game is essentially a cover-based shooter with some stealth moments and the odd simple puzzle for variety. Most of the time, you head for cover, for soldiers to stop firing, pop out your head and return the favour. It actually reminds me an awful lot of Call of Duty. I don’t mean Modern Warfare or any of its ilk, with their over-laboured set pieces or crushing po-facedness – I mean the 2003 original. That too was about simple cover mechanics and interspersed large firefights with rest periods that would do work worldbuilding whilst the player caught back their breath.

The other title I kept recalling was the PS2 classic TimeSplitters. TNO has the same freedom of movement, similarly crisp and straightforward visuals, and a lot of the same gun-fun attitude. TimeSplitters could get away with its tonal shifts, though, because it never took itself seriously, and the time-travelling gambit meant it could have its anachronistic cake and eat it.

I’m not sure TNO can, however. It’s a bit of a WWII buffet – Bethesda cramming in as much Third Reich sightseeing as they can for their Nazi safari. You have your classic Normandy beach storming hell experience for starter, followed by a glimpse of Third Reich Pride Berlin. You’ve got a Concentration Camp Level as a main course, and a good old Oppressed London side dish for the sake of mentioning the Brits. You’ll get to see a U-Boat, and you even get a five minutes’ romp bouncing around the moon. It’s certainly varied.

But it needs to be, because the core gameplay isn’t that deep. I’m not saying it’s not enjoyable, just that it’s the kind of game that needs a lot of cooldown moments, dialog and world-building sections to keep things interesting. The weapon selection is small, padded with dual-wielding; enemies are competent fighters but don’t really change much as the game progresses; most of your fighting is done with small arms and most firefights require similar tactics. It works well enough in short bursts, but don’t expect much tactical depth.

Anticipating this, TNO creates a ‘perks’ system where certain kinds of achievement – killing three soldiers without letting go of the fire button, say – unlock weapon upgrades and skills you can enjoy permanently. It’s not a bad idea, because it allows players who have mastered the basic combat to set themselves arbitrary constraints that make the game a lot more challenging. Unfortunately, most of these perks aren’t terribly useful, and they can’t be or else all they’d do is make the game easiest for the most skilled players. 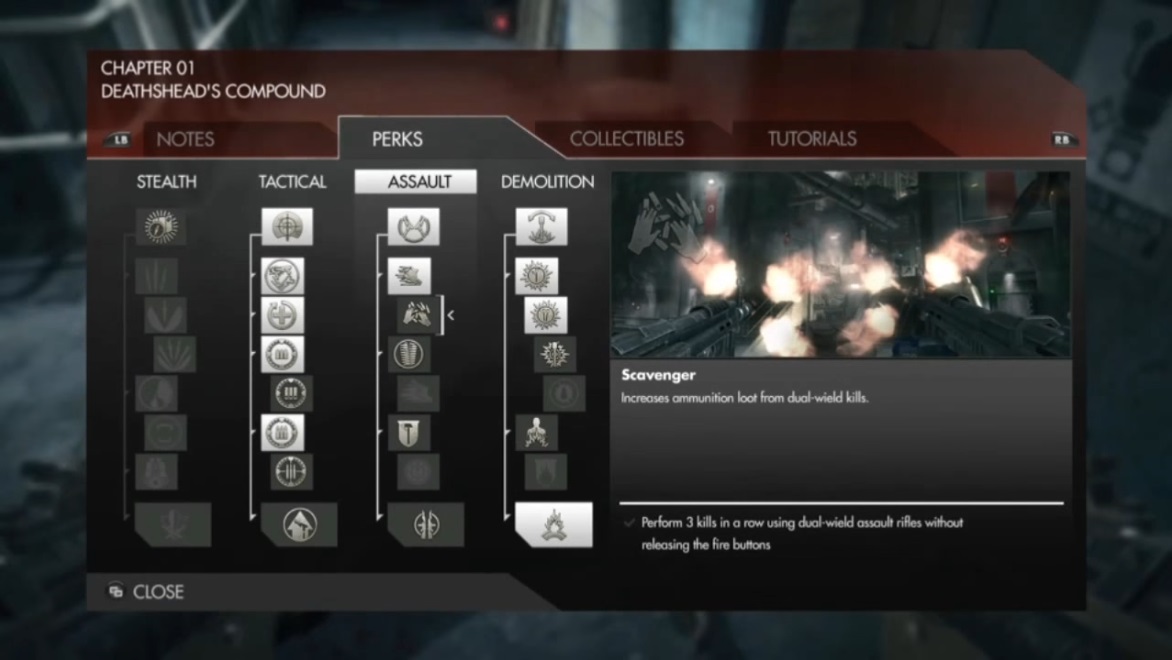 The perk system addds a much-needed extra dimension to the killing.

Thankfully you can change their difficulty settings at any time, which is probably a good thing given an inconsistent difficulty curve. Firefights seem to either have masses of cover – where the player is well-guarded – or throw the player into open areas where cover is hard to reach, so they have few means of survival. Enemies hit hard and fire straight – which is exactly how they should in a cover-based shooter, don’t get me wrong – but sometimes the game forgets this and pretends it’s a movement-based shooter a la Quake or Painkiller, where enemy attacks are obvious and easy to outmanouevre. The result was that I played large portions of the game on hard, but every so often had to downgrade to normal and would still only scrape through after a few deaths. Maybe I’m out of practice.

I did enjoy TNO as a shooter, though. For the most part it is energetic, visceral and satisfying. My bigger issues were with the content, like the concentration camp, which played a lot like human horror porn, and the extreme violence from start to finish. I’m not squeamish by any mark, and I’ve no sympathy for the SS, but I did feel a little uncomfortable using the “but they’re Nazis!” gambit as an excuse to dismember, drown, blow up and shred so many bodies. At times I felt I was playing a power fantasy game that was exploiting the history as a cover for sensationalism.

I’m reminded of another story that takes a lot of pleasure in grisly SS deaths – Inglorious Basterds. There, a theatre plays a German propaganda film about a Nazi sniper who takes revenge on helpless American soldiers. The audience watches in glee. Moments later, we’re invited to enjoy their death in the same way, but it comes with a sting in the tail – aren’t we doing the same? How much better do we end up if we indulge our passion for hatred and ultra-violence? Wolfenstein, by contrast, asks no such questions. It laments the horrors of war, but treats us to a long, indulgent look all the same. 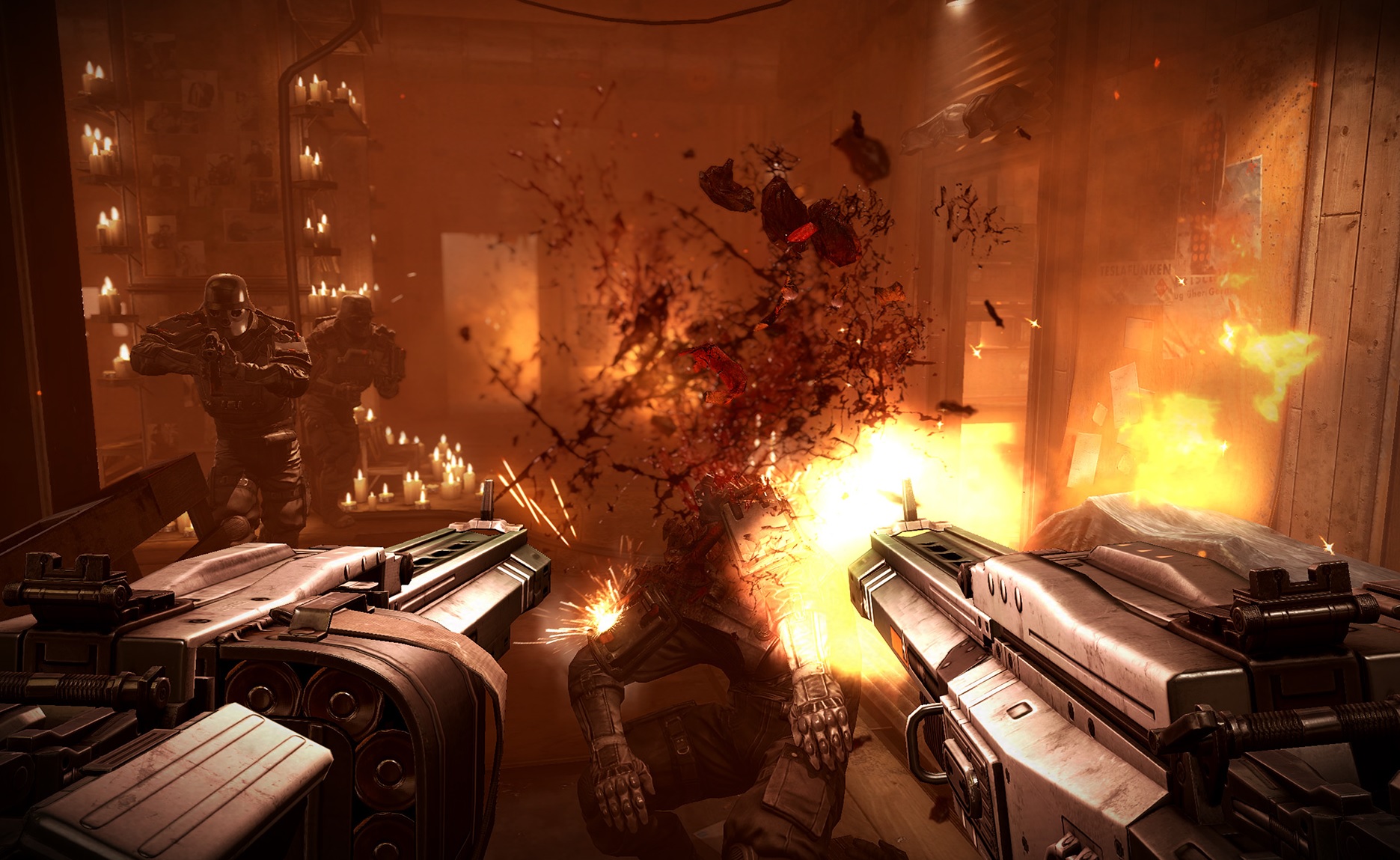 Honestly, by the The New Order’s standards, this is pretty tame.

Overall, then, The New Order is an eminently playable and even enjoyable game, but a schizophrenic one. At times it’s heartfelt, with characters who act and react in realistic ways given their dreadful circumstances. At other times, though, it’s entirely unserious, with a hard rock soundtrack and dual-wielding shotgun rampages. It styles itself a retro FPS, but it actually borrows a lot from contemporary shooters, with their linear set pieces and cover mechanics. It wants to consider the human tragedies and the inhumanity of the holocaust, but then uses them to excuse gorn and violent fantasy.

There could be two good games here: a serious story about the ways humans thrive and stay humane under impossibly cruel odds, and a non-serious game about blasting 2d Nazi cutouts with a copious armory of increasingly excessive weaponry. If only The New Order had decided which one it wanted to be.